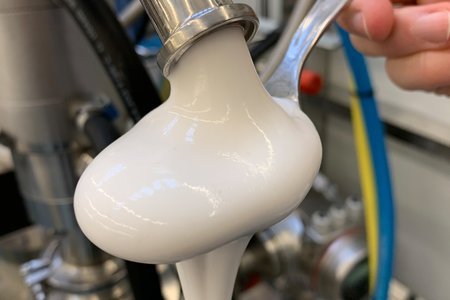 Many food manufacturers are already following the global trend towards vegan lifestyles and are launching vegan versions of their products. Some manufacturers are also trying their hand at ice cream, but the difficulty of matching the texture and taste of non-vegan ice cream remains significant. The company Kinematica, with its many years of experience in mixing technology, and the Institute of Food and Beverage Innovation at the ZHAW (Zurich University of Applied Sciences) have taken on this challenge. Together, they launched a research project six months ago with the aim of producing a vegan ice cream with improved properties without additional additives. 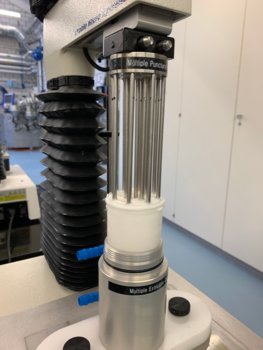 Texture analysis - this is how the hardness of the vegan ice cream is determined in addition to the sensory analysis.

The results speak for themselves

After the first tests, the project team led by Dr. Lea Meier-Pokorny and Prof. Dr. Nadina Müller is very confident. Prof. Dr. Müller: "Vegan products should taste just as good as their animal equivalent: this is the attitude with which we started this project and we are pleased that the first trials have shown promising results. The road to success will lie in a novel process in combination with optimized recipes."

Ice cream was selectively foamed in the manufacturing process using two of Kinematica's technologies, rotor/stator and membrane technology, and compared it to classic production of ice cream in a freezer. With the rotor/stator technology, the gas content was increased by 40% compared to conventional reference processes, with a simultaneous significant reduction in bubble size. This increased gas content is an important factor for ice cream, as it has a positive influence on the melting behavior and the creamy mouthfeel. Likewise, individual test persons gave feedback that the new vegan ice cream had a richer body, a longer lasting mouthfeel and was generally creamier. 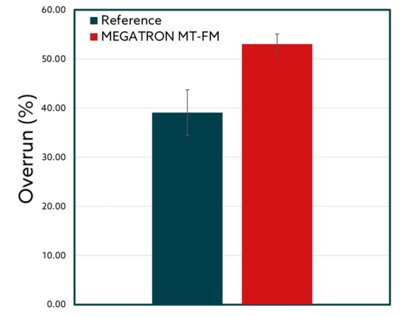 The vegan ice cream with the foaming machine MEGATRON MT-FM (rotor / stator) has a higher gas content, with a simultaneous significant reduction in bubble size reduction.

The project is not over yet

Promising results were also obtained with the membrane technology. The hardness of the ice cream tended to be reduced for all samples and significantly for some, resulting in a creamier feel, reduced sandy mouth feel, and a longer and richer flavor perception when tasted. The results are now being further evaluated and additional testing will be conducted. The project team is confident that they have taken a big step and are optimistic that vegan ice cream will soon be on the shelf as a competitor to non-vegan ice cream. The project team is looking for companies that are interested in further tests on their products and would like to extend the project to sorbet ice cream. Quote: "We have already achieved promising results in the laboratory and gained important insights. Now our goal is also to test this with companies and their products, which are intended for the broader market." Contact: science@kinematica.ch.